In 1949, four sophomores wanted something different from Brown’s traditional men’s Glee Club, so they formed their own independent singing group, soon to be called The Jabberwocks (from the Lewis Carroll poem, “Jabberwocky”). The quartet quickly rose to on-campus fame, offering a new and exciting form of music to the students. Now, decades later, the Jabberwocks remain a fixture of student life at Brown and the oldest a cappella group at the school.

Aside from regular appearances at Brown and other college campuses across the country, the Jabberwocks have sung for a wide variety of audiences. The group’s past gigs include serenading Miss America ’98, singing the National Anthem for opening weekend games at Shea Stadium and Veterans Stadium, performing at Carnegie Hall, and appearing on the national TV airwaves of South Korea. With powerful music augmented by choreography and humorous skits, the Jabberwocks remain committed to pushing the envelope a cappella excellence.

The Jabberwocks have received numerous awards, have had tracks on the Best of Collegiate A Cappella albums (BOCA), and have been honored in the CARA awards. The Jabberwocks release a new CD every two years and are constantly recording. Their latest album, “Jabbertalk”, can be heard on the Music section of the website. The Jabberwocks’ long-standing tradition of excellence and cutting-edge a cappella remains strong after more than 70 years.

Please feel free to contact us with questions, comments, or anything else.

In 1949, four Glee Club members believed that an independent group of the type that had been springing up during that decade on other campuses would be more to their liking.  These four men, as one of them put it, were ”a quartet looking for a name.”  One night that fateful year, one of the founding members sat eating dinner in his fraternity house, when one of the brothers stood up and recited the poem, because, well, that’s what you did for fun in 1949. Immediately, he conceived of calling the group “The Jabberwocks”, and brought the idea to the others in the quartet (soon to be octet) who agreed that it was a good name for a singing group. We still think so! 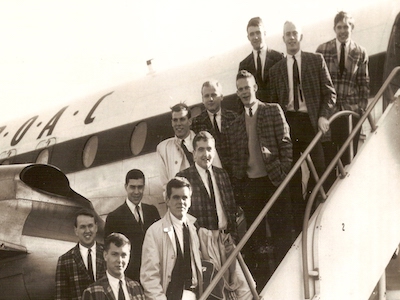 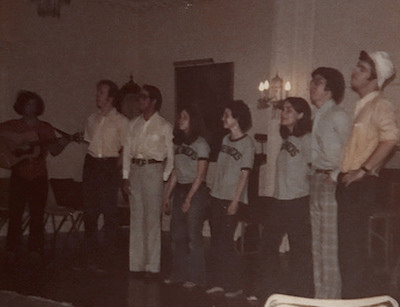 Looking sharp in those White Tuxes 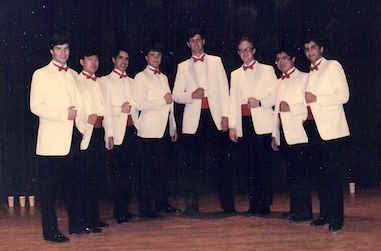